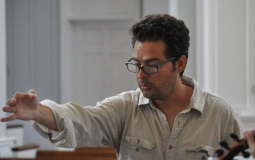 Tomás Fajardo is the conductor and founder of the Magnolia Chamber Orchestra as well as a violist and music educator. Currently he is a member of the Mobile Symphony Orchestra in Alabama. Mr. Fajardo recently debuted in the Washington DC metro area as guest conductor of the Metropolitan Orchestra at Montgomery College. His earlier orchestral experience includes Victoria Bach Festival Orchestra and the Mercury Baroque Ensemble of Houston, Texas. He also performed and toured with the Jeune Orchestra Atlantique in Saintes, France. Recent performances include European tour  in Malta, at The Valletta International Baroque Festival and Czech Republic with French based orchestra Jeune Orchestra Atlantique. Upcoming performances include  concerts with JOA in Saintes, France and as soloist in Mozart's Sinfonia Concertante with the Metropolitan Orchestra in Washington D.C.
Mr. Fajardo holds a master’s degree in viola performance from the University of Southern Mississippi, graduate studies at the University of Houston, and received a Performance Diploma from the Longy School of Music in Cambridge,MA. His principal teachers include Michael Kimber, Michael Zaretsky, Rita Porfiris, and Roger Tapping. Mr.Fajardo also has done conducting studies at the Tafelmusik Baroque Summer Institute Conductor's Program in Toronto, Canada with Jeanne Lammon.

Venezuelan violinist María José Romero Ramos is pursuing a Doctorate of Music in Violin Performance at Indiana University.  Ms. Romero obtained her Masters from the same university as a recipient of the prestigious Jacobs Fellowship, studying both modern and baroque violin.  She was prizewinner at the 2013 National Arts and Letters Instrumental Competition, Bloomington Chapter, and winner of the 2013 Indianapolis Baroque Orchestra Concerto Competition.  She has performed at the Isaac Stern Auditorium in Carnegie Hall, as well as many other nationally renown venues.  As an advocate for the arts as a social tool, Ms. Romero is a volunteer teacher for MusAid, a non-profit organization that provides instruments and music education to developing countries.

Farkhad K. Abdikadirov is from Tashkent, Uzbekistan. Born in the former USSR, Mr. Abdikadirov is attending the Longy School of Music in Cambridge, as a viola performance major. Farkhad is passionate about bringing early music education to the Gulf Coast of Mississippi.

Hayley Raye Murks is a native of Gulfport, MS.  This Fall, she is attending the Longy School of Music in Cambridge, MA to study viola performance. She is the 2013 recipient of the Edith Eisler scholarship award from the STRINGS Magazine. Hayley is passionate about music, photography, and longboarding.

Born in Caracas, Venezuela, Ursula Miethe began her cello studies at the Music Conservatory of Carabobo, in Valencia, at the age of nine. She holds a Bachelor degree in cello performance from Louisiana State University. She just finished her first year teaching at Hattiesburg public schools and will be moving to Brazil to continue her  performance and teaching career. Ursula enjoys dancing and having fun outdoors.

Jackson Guillén is currently a Doctorate student at the University of Houston where he studies with violinist Kirsten Yon. Born in Honduras, Jackson holds a Bachelor of Music from the University of Southern Mississippi and a Masters in Music from Texas Tech University. He is a member of the YOA Global Leaders Program and organizes the annual “Encuentro de Cuerdas Frotadas” in Tegucigalpa Honduras. Jackson is married to Venezuelan cellist Mayara Velasquez.

Colombian violinist Mauricio Oliveros-Romero, attained his Doctor of Musical Arts in Violin Performance from the University of Houston. He enjoys playing soccer, going to the gym and watching sports. Dr. Oliveros is an avid lover of chamber music and soon hopes to start a teaching career in higher education.

Guillermo Salas-Suárez holds a Bachelor of Music in Violin Performance from Louisiana State University, where he studied with Professor Espen Lilleslatten. Originally from Costa Rica, Guillermo began music studies at the age of nine. He enjoys literature, creative writing, and learning languages.

Margaret Dixon is going into her sophomore year at Manhattan School of Music, where she studies under the guidance of Karen Ritscher. She is originally from the Washington, DC Metropolitan area, where she Began her musical studies at age six. Her interests include reading, yoga, and coffee.

Mayara Velasquez, originally from Venezuela, holds a Bachelor of Music in Cello Performance from Louisiana State University where she studied with American cellist Dennis Parker. This summer, Mayara will be one of the participants joining the Youth Orchestra of the Americas 2013 tour for Central America.  Mrs. Velasquez  will be starting her master in music performance in August at the Moore School of Music in Houston, Texas. Mayara enjoys cooking and making music with her husband, Jackson Guillen.

Double bassist Dr. Julia Shulman has performed in various countries and ensembles. As a resident of Israel for six years, Julia performed with the Jerusalem Broadcast Symphony Orchestra and the Ra’anana Symphony. She served as principal bassist with the Cape Ann Symphony, and performed with other Massachusetts-area orchestras. She has participated in several contemporary ensembles and projects, including the Slee Sinfonieta, CUBE and the Quey Percussion Duo, Strings and Hammers and the Eastman Broadband. Recent projects include a lecture recital on Hungarian Composers’ Works for the double bass at the International Society of Bassists 2013 Convention in Rochester NY. A graduate of DMA from the Eastman School of Music, Julia holds a Bachelor of Music degree from the Rubin Academy in Jerusalem and a Master of Music degree from the Longy School of Music. Her main teachers were István Lukácsházi, Michael Klinghoffer, Pascale Delache-Feldman and James VanDemark. In addition, she also holds a Master’s degree in Library and Information Science from the University at Buffalo.

Bernardo Miethe started his musical studies in 1996, at the age of 9, in the Carabobo Music Conservatory of Venezuela. He was the principal flute at the Carabobo’s Youth Orchestra from age 15 to age 17. With this group, Miethe also played Tchaikovsky’s 2nd symphony under the direction of Gustavo Dudamel in 2002. Miethe was also the first piccolo at the Venezuelan Central-Region Orchestra from August 2004 to December 2005, conducted by Gustavo Dudamel, which played annual concerts in Venezuela’s capital for musicians like Claudio Abbado and Sir Simon Rattle. Mr. Miethe has also performed in master classes with renowned flutists: Luis Julio Toro, Tadeu Coelho, Richard Sherman, and Berliner Philharmonic’s piccolist Michael Hasel. Mr. Miethe was also in the Ad-Libitum woodwind quintet and during his three years in that ensemble, he received master classes with the Berlin Philharmonic woodwind Quintet in two music festivals. Miethe is currently 24 years old, holds a degree in flute performance from USM (Danilo Mezzadri, professor), a master’s degree in wind conducting from the same institution and is working on his D.M.A. in orchestral conducting with Carlos Riazuelo at LSU.
Powered by